The new infrastructure concept by the partner consortium at SmartFactory-KL represents a scalable solution that is very appropriate for Industrial Intelligence applications. In addition, the use of TSN for the data exchange between infrastructure and server ensures transmission quality. The SmartFactoryKL partner consortium is exhibiting this advanced development at the Hannover Messe from April 1-5, 2019. The joint exhibit stand of SmartFactory-KL and the German Research Center for Artificial Intelligence (DFKI) is located in Hall 8, Stand D18. 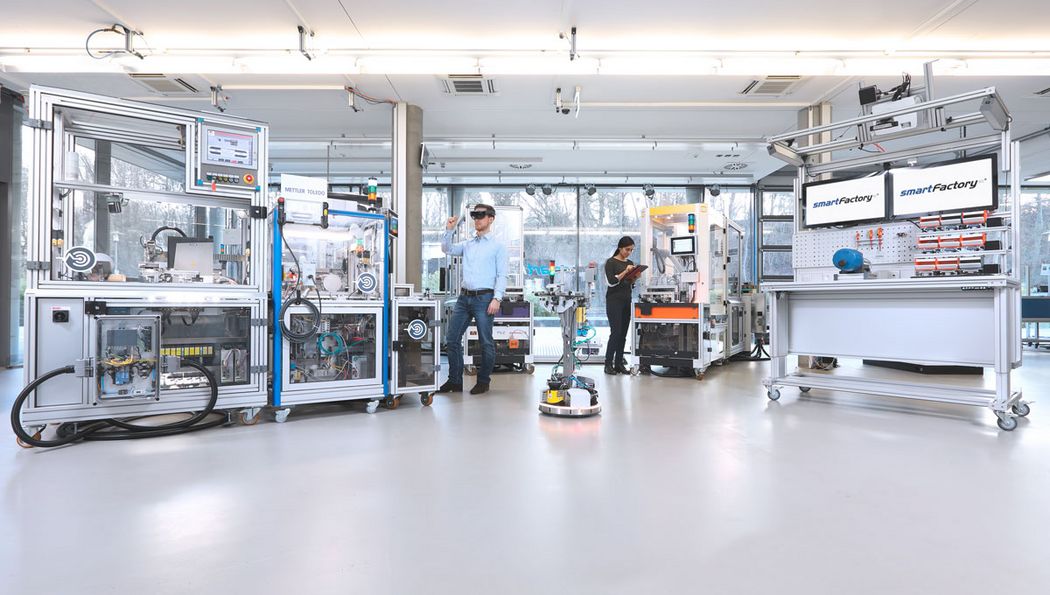 The SmartFactory-KL partner consortium has given the infrastructure of the Industrie 4.0 production plant a new, star shaped, scalable installation concept. The infrastructure nodes support independent production cells having several stations. “This solution illustrates the next step towards the practical introduction of a standardized module interface. The production plant can now be quickly and flexibly reconfigured,“ said Prof. Dr. Martin Ruskowski, Department Head of Innovative Factory Systems research at DFKI.

The computing power provided by edge devices in these nodes is now available for Industrial Intelligence applications. A good example of the benefit of locating edge computing in the infrastructure box is the display of usage data for the individual stations shown directly on the box. The production worker can quickly see and associate the data with the connected modules. This simplifies decentralized condition monitoring and enables anomaly detection in the production station and analysis using the power data, which then facilitates the initiation of the required maintenance steps.

SmartFactory-KL has recently implemented data transmissions between infrastructure and server via real time TSN technology (Time-Sensitive Networking). Data packets are now prioritized using TSN. Thanks to priority classifications, flexible decision-making is possible about what data must be immediately available and where delays are acceptable. TSN guarantees, for example, that critical safety data will be sent with the highest priority and will arrive even when the network is heavily loaded. It ensures that even in an overloaded network, the station continues reliable operation.

“TSN makes an important contribution to both horizontal and vertical integration. Additionally, TSN in combination with OPC UA facilitates manufacturer independence at the data transmission level. This means multiple sensors and actuators can send and receive data in real time while ensuring that existing plants can be flexibly upgraded. The proprietary field bus of the past is no longer an issue,” said Prof. Dr. Detlef Zühlke, Chairman of the Board of SmartFactory-KL in summarizing the advantages for the industry.

About the Technologie-Initiative SmartFactory KL e.V.
The SmartFactory-KL technology initiative was established as a non-profit organization in 2005, bringing industry and research partners together in a network to jointly implement Industrie 4.0 projects for the factories of the future. SmartFactory-KL is a unique, manufacturer-independent demonstrator and research vehicle located at the German Research Center for Artificial Intelligence (DFKI) in Kaiserslautern. Promising innovative Information and Communication Technologies (ICT) are evaluated and further developed in a realistic, industrial production environment. The technology initiative has already developed products and solutions as well as universal standards in the areas of Industrie 4.0 with the active participation of its members. Together with other regional competence suppliers, SmartFactory-KL was recognized by the German Federal Ministry for Economic Affairs and Energy (BMWi) and designated as Mittelstand 4.0 Competence Center (SME) Kaiserslautern. 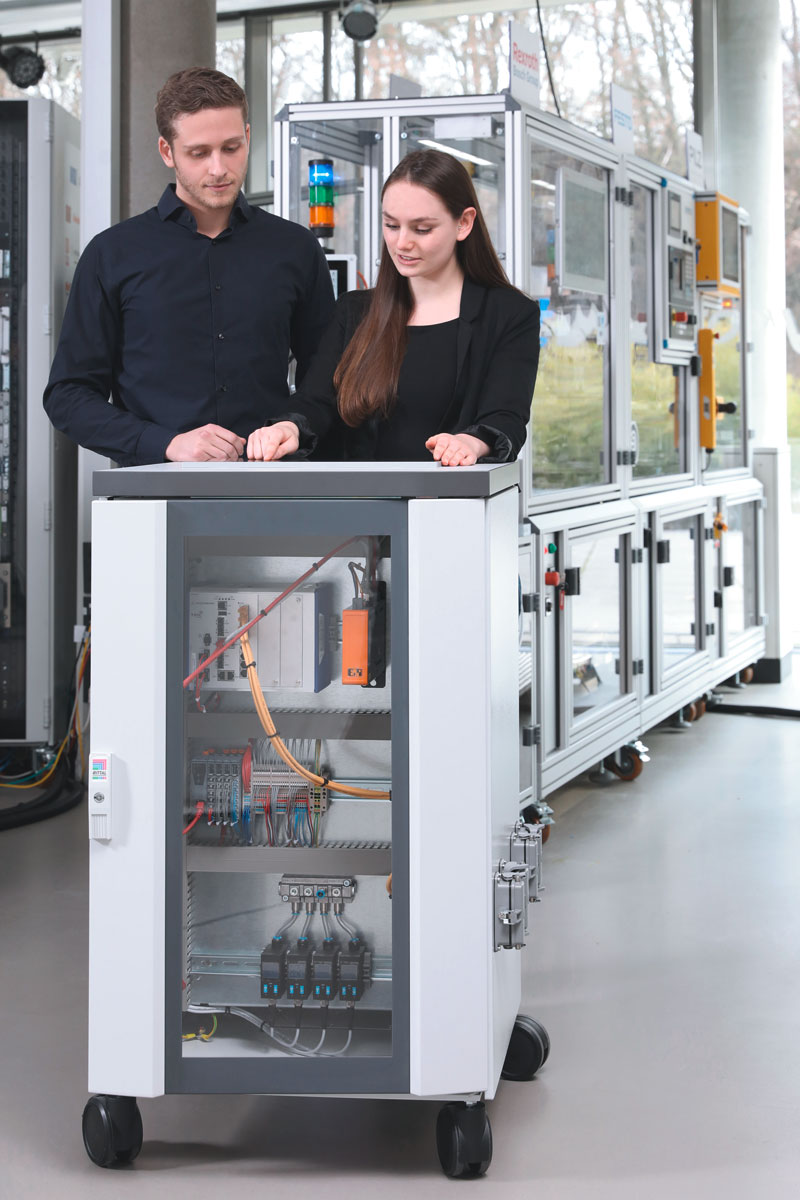 © SmartFactory-KL / A. Sell
The new infrastructure concept at SmartFactory-KL represents a scalable solution that is appropriate for Industrial Intelligence applications. 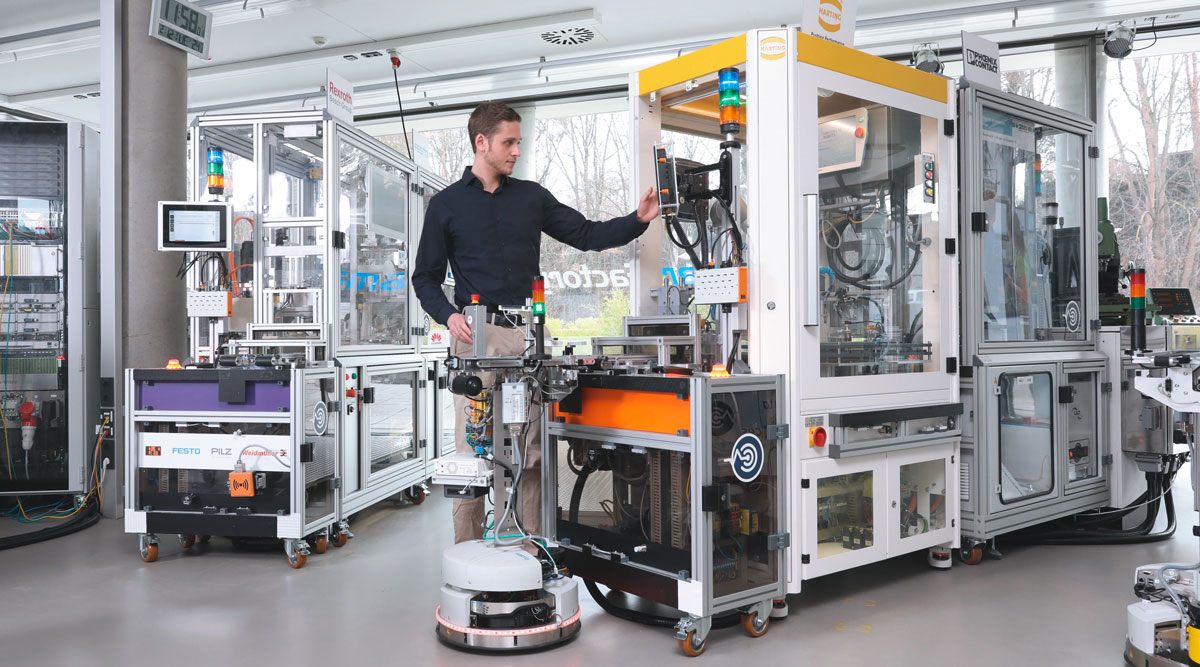