Could Jupiter’s moon Europa offer the right conditions for extraterrestrial life? How could the ocean, which is suspected under the sheet of several kilometers of ice, be investigated? In the Europa Explorer project series, the German Research Center for Artificial Intelligence (DFKI) is developing underwater robots that can autonomously conduct research under ice. With the third project section on the long-term under-ice navigation, the last preparations for the field trials in Scandinavia are underway. The German Ministry for Economic Affairs and Energy (BMWi) funds the development and field trials of the robot DeepLeng with roughly 877,000 Euro. 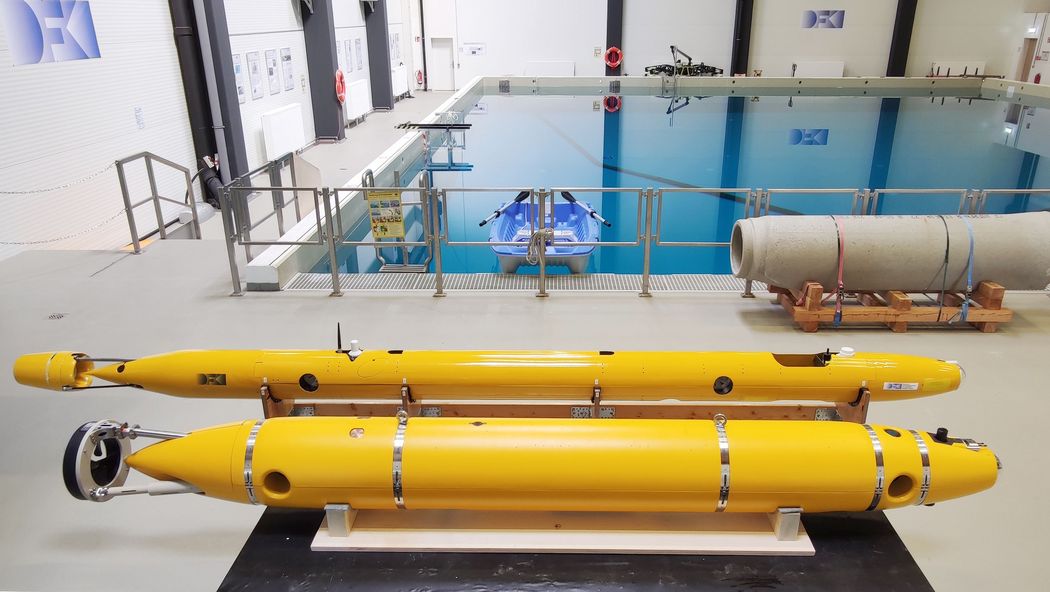 The two autonomous underwater robots Leng (back) and his successor DeepLeng (front) can be seen in the Maritime Exploration Hall at the Robotics Innovation Center of the DFKI in Bremen. Source: DFKI GmbH, Photo: Philipp Kloss.

In an ocean covered by an up to 15 kilometer thick sheet of ice that is located on Europa, one of the moons of Jupiter, in an average distance of 600 million kilometers – this is where it could be found: Extraterrestrial lie. The warmth and minerals of the hydrothermal vents, which are suspected to exist on the ice moon, offer a potential habitat for organisms. But how could this place be investigated? As part of the Explorer-Initiative of the German Aerospace Center (DLR), the Robotics Innovation Center in Bremen as developed fully autonomous underwater robots that can navigate and conduct research below a sheet of ice.

With the third section of the Europa Explorer project involving long-term under-ice navigation (EurEx-LUNa), which started on 1 March 2020, the last steps are underway to test the latest autonomous underwater vehicle (AUV) in field trials: DeepLeng, the successor of the first EurEx-AUV Leng, is set to prove the feasibility of the concept for autonomous navigation under ice in a frozen lake in Scandinavia. In preparation, the robot is equipped with a new diving cell and trained for its safe return.

Risk minimization is the central aspect of the EurEx-LUNa project: Apart from the unknown underwater surroundings, the sheet of ice adds another challenge for the localization and the safe return of the AUV. For this reason, DeepLeng is taught to be able to find its way back even under the most adverse circumstances. The researchers of the DFKI Robotics Innovation Center are working on a fault tree for the software, which offers alternative decisions for DeepLeng to make in as many scenarios as possible. In addition to a new diving cell, which allows the AUV to sink to and rise from depths of up to 2,000 meters with little energy expenditure, a USBL underwater navigation system is installed that sends, receives and analyses acoustic signals.

An important part of the field trials is the successful docking: In the navigation concept for the ice moon Europa, the three-meter-long and 28 centimeter wide DeepLeng is meant to autonomously reach a docking station and connect to it safely. By doing this, the AUV can conduct much longer research missions than his ten-hour-battery would allow for. With space for two additional payload modules, DeepLeng can transport and employ further sensoric components for diverse additional research in the ocean on the ice moon. An example would be the creation of altitude maps or profiles of the temperature and salinity of the water.

From the test basin via the local lake to Scandinavia

In order to allow for the safe docking, the scientists are employing methods of Deep Reinforced Learning with which the software of the AUV weighing 120 kilograms is trained in a simulation. The first tests under water will be conducted in the Maritime Exploration Hall of the Robotics Innovation Center, which is unique in Europe and offers plenty of space with its 3.4 million liter saltwater basin. In the second step, the robot explores the University lake of Bremen, before the actual field trials in Scandinavia take place in early 2022. Another deployment in the new test field of the Test Center for Maritime Technologies near Heligoland in the North Sea, which the DFKI is operating together with the Fraunhofer Institute for Manufacturing Technology and Advanced Materials IFAM, the Helmholtz-Zentrum Geesthacht – Centre for Materials and Coastal Research (HZG), the Institute for Chemistry and Biology of the Marine Environment (ICBM) at the University of Oldenburg and Jacobs University Bremen, is considered in preparation for the field trials.

After the field trials, the gathered information and insights from the navigation will be evaluated in order to employ them in future projects which one day could lead to an actual search for extraterrestrial life on Jupiter’s ice moon Europa by autonomous robot teams. The German Federal Ministry of Economic Affairs and Energy (BMWi) is therefore funding the EurEx-LUNa project with roughly 877,000 Euros over a runtime of two years and three months.

Photos
At cloud.dfki.de/owncloud/index.php/s/YSBkFrJgdxZqTZm you can find photos of the robot systems ready for download. You may use these photos for your publication in relation to the described project while stating the photo sources mentioned in the document.