After a two-year break due to the pandemic, the teams of the Standard Platform League met at the Hamburg Chamber of Commerce from April 12 to 17, 2022, to determine Germany's best robot kickers at the German Open Replacement Event (GORE) – one of five decentrally organized events of the RoboCup German Open 2022. Without conceding a single goal, B-Human, the team from the University of Bremen and the German Research Center for Artificial Intelligence (DFKI), once again managed to bring the title home to Bremen. 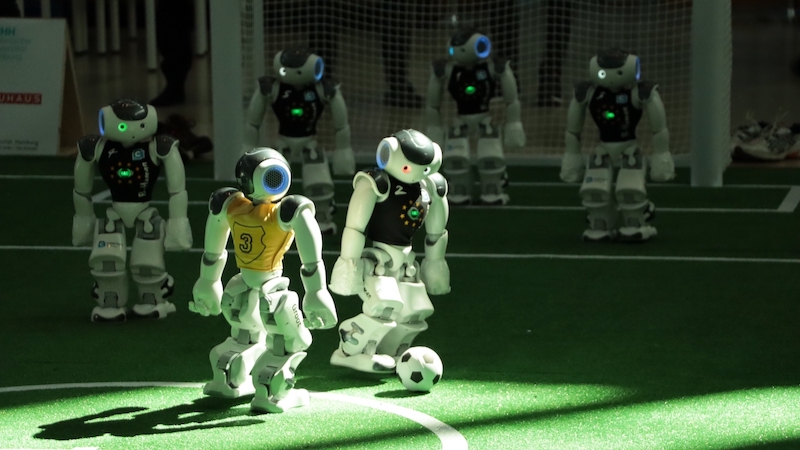 © Finn Ewers
The NAOs had to cope with difficult, permanently changing light conditions during the games in Hamburg.

In the first face-to-face tournament in more than two years, B-Human dominated the group phase first and later also the deciding matches up to the final. With a total of 58:0 goals, the Bremen NAO robots went eight games without conceding a goal. Under partially difficult lighting conditions with glaring sunlight on the field, the team proved to be strong in one-on-one action and was able to impress with nice passes. In the final against the HTWK Robots from Leipzig, one such pass led to a 2:0 score right at the beginning of the second half, making an important contribution towards the 4:0 final score.

GORE 2022, which is an official RoboCup event, was attended by seven teams in person and two virtual teams. The latter ran their software on robots provided for them by the teams on site. The RoboEireann team from Ireland took third place in this manner. The possibility of successfully running their own software on foreign NAOs is a result of the pandemic. This was the only way to compete with real systems. As a basis for their own work, the RoboEireann team used the software published by B-Human last fall.

At RoboCup, the rules by which the robots play are made stricter from year to year. This year, the number of messages that the NAOs were allowed to exchange with each other via Wi-Fi was greatly reduced. Previously, each robot was allowed to send a maximum of one message per second. According to the new rules, the maximum number applied to the entire team and the entire game, which effectively corresponded to a reduction in data exchange by a factor of 5. Each NAO therefore always had to consider whether sending a message really made sense in the current situation, as it reduced the available communication budget for the rest of the game. The Bremen team used numerous criteria for this, as well as a sliding limit based on the remaining game time, in order to continue to enable cooperative team play.

Currently, B-Human is composed of 15 students from the University of Bremen, a former student who is involved in the team in his spare time, and the supervising researchers Dr. Thomas Röfer and Arne Hasselbring from the DFKI Cyber-Physical Systems research unit, which is led by Professor Rolf Drechsler, as well as Dr. Tim Laue from the University of Bremen. The company CONTACT Software, the leading provider of solutions for product processes and the digital transformation, has been B-Human sponsor since 2017. 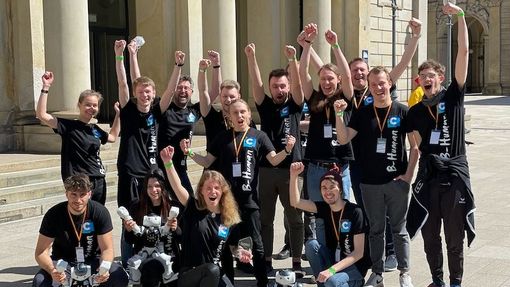 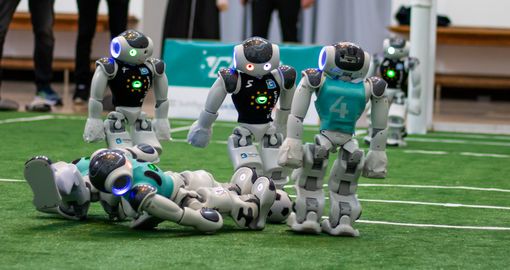 © Ayleen Lührsen
The kickers of B-Human (black shirt) defend the ball in the preliminary round match against team rUNSWift. 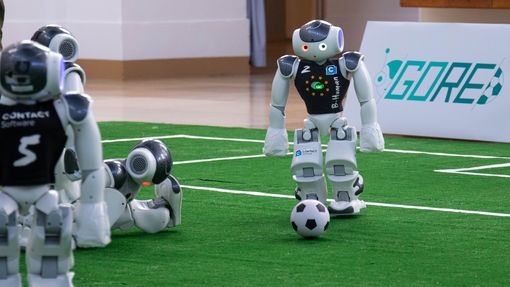 © Ayleen Lührsen
The NAOs from Bremen dominated the competition – from the group stage through the play-offs to the final.