5G is more than a fast cellular connection. 5G is a key technology in the age of digital networks. In combination with artiﬁcial intelligence, new technological possibilities will unfold for industry, commerce, and society. However, before 5G becomes the universal communication platform for ﬂexible manufacturing and the networked world, a number of technical challenges must be overcome. DFKI is responding in a variety of research activities with its broad range of competence and its involvement in groundbreaking projects and initiatives. 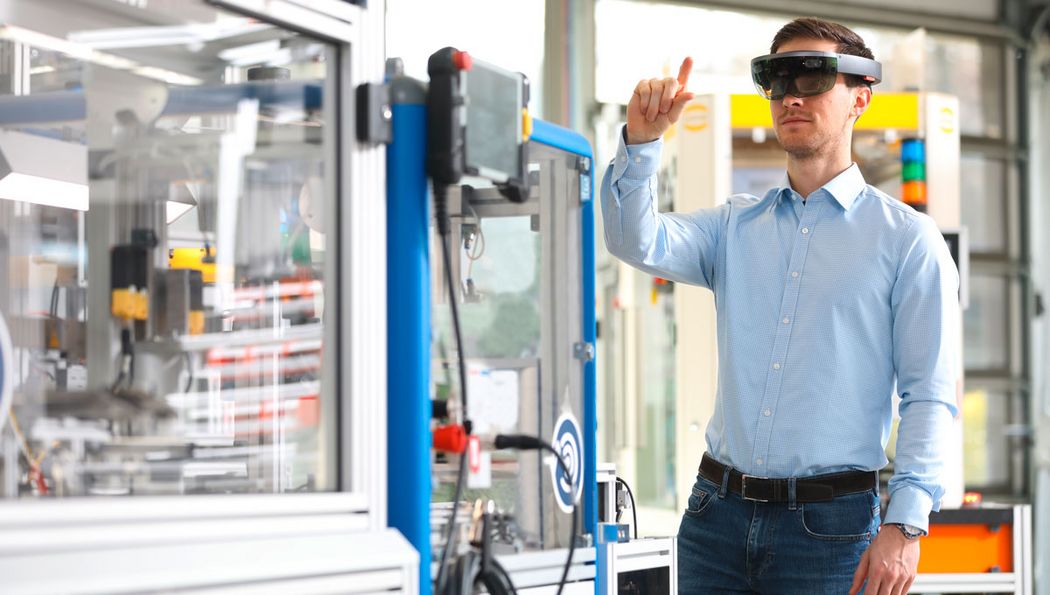 Many future-oriented technologies and AI applications depend on the transmission of large amounts of data in real-time – for example, the cooperation of humans and robots in INDUSTRIE 4.0, the communication of vehicles and traffic systems for autonomous driving, or long-distance operations in telemedicine.

5G promises speeds at least 100-times faster than the current LTE standards for minimal reaction times – much faster than those of humans. This is critical for safety functions, for example, emergency stop circuits in a wireless production environment. However, the transmission rate and latency are not the only major prerequisites for real-time communication. An ever-increasing number of networked devices, machines, and everyday objects must operate simultaneously. The network must be reliable and secure against failures and attacks. These are just some of the many requirements that are predestined for an artiﬁcial intelligence solution. The interplay between 5G and AI holds great potential for entirely new integrated applications and business models.

“5G provides AI systems with the necessary  data in real-time. AI, in turn, uses that data to control and optimize the network. The combined advantages of these technologies will enable many new use cases in many areas.” – Prof. Dr. Hans Dieter Schotten

DFKI’s research activities are wide-ranging within a framework of publicly funded projects, strategic partnerships, and neighboring universities. The department of Intelligent Networks cooperates with the Kaiserslautern University of Technology (TUK) on pioneering 5G projects at the national and European levels and has con-tributed groundbreaking efforts in this area. The department of Innovative Factory Systems tests the practicality of 5G technologies in partnership with the SmartFactory-KL membership at its research factory located at DFKI-Kaiserslautern. A building extension is currently ongoing there to provide additional test facilities and demonstrator areas for the 5G research being conducted in the DFKI departments. The scientists at the DFKI Lab in the German state of Lower Saxony are working on environmental and traffic safety scenarios in coastal and port areas as well as on the monitoring and control of farm machine ﬂeets. Other departments are investigating technologies with potential in the context of 5G, such as data processing directly in the sensors or for use in robotics and the area of ambient assisted living.

“The factory of tomorrow is ﬂexible and networked. Workplaces of the future will organize themselves (self-organizing, so to speak),” said Prof. Dr. Martin Ruskowski, head of Innovative Factory Systems research at DFKI and chairman of the Board of SmartFactory-KL. “More and more machines, devices, and services are becoming part of the production network. The traditional communication structures are fading out, shifting more and more to a virtual environment,” added Ruskowski. Together with AI, the 5G wireless technologies enable seamless integration of autonomous systems and mobile platforms without any cable connections, creating entirely new manufacturing methods.

“Real-time communication capability is a success factor for INDUSTRIE 4.0. 5G will signiﬁcantly improve the ﬂexibility, convertibility, and productivity of industrial manufacturing. We have a unique environment at SmartFactory-KL that allows us to test relevant use cases, to develop new concepts, and to transfer these into practical applications.” – Prof. Dr. Martin Ruskowski

Since 2018, joint presentations with SmartFactory-KL at the Hannover Messe have included: safety solutions for mobile transport systems, time-sensitive networking (TSN), edge computing as well as data transmission and processing in the Cloud via 5G.

Pioneering work at DFKI and TUK

“TUK and DFKI have been instrumental in laying the foundations for 5G and its further development in crucial projects,” said Prof. Dr. Hans Dieter Schotten, head of DFKI's Intelligent Networks research department and chair of Radio Communication and Navigation section at TUK. The team at TUK has been involved in earlier EU 5G projects, for example, METIS, which deﬁned the fundamental requirements for the new wireless standard and created the basic technical structures. Prof. Schotten states: “5G was virtually invented in METIS.”

METIS II is now merging the different network technologies into an integrated system and developing additional components. In leading-edge projects like 5G NORMA and 5G MONARCH, scientists are studying the adaptability of different services (network slicing) as well as their implementation in the Port of Hamburg. The BMBF- sponsored AMMCOA project has developed local networks for agricultural applications – one of the research priorities at TUK.

The German Federal government has the stated goal of making Germany a lea-ding center for innovative services and business models on the basis of the new standard. Prior to a nation-wide development, the new wireless standard is being tested in six pilot regions. The new technologies will be developed and demonstrated in these regions. In June, a total of EUR 44 million in funding was released for this purpose by the budget committee of the German Parliament (Bundestag). The Kaiserslautern region, where for many years DFKI and the Technical University have contributed pioneering research in this ﬁeld, was chosen along with ﬁve other cities and regions.

TU Kaiserslautern will develop and operate four-campus networks in cooperation with the DFKI for the purpose of researching 5G technologies in special test scenarios as part of this large-scale project. These include INDUSTRIE 4.0 applications in the smart factory, networked mobility solutions, smart farming, and a portable system for setting up campus networks at any location.

“This region has the advantage of being a center of excellence; with its existing networks of research institutes and companies, it is ideal for bringing technolo-gies and users together. In this way, we can develop urban as well as rural and industrial scenarios in dialog with our partners and other DFKI locations,” said Prof. Hans Dieter Schotten.

DFKI became a founding member of the “5G Alliance for Connected Industries and Automation” (5G-ACIA) at the German Electrical and Electronic Manufactu-rers’ Association (ZVEI) in April 2018. This international initiative unites the major players in the 5G sector – representatives of the traditional automation and manufacturing industry, as well as the leading organizations in the ICT sector. The aim is to successfully establish 5G in industrial production systems and ensure its suitability for industrial applications from the start. To this end, ACIA is actively involved in the standardization and regulation of 5G and works to identify possible applications and requirements in the manufacturing environment.

5G-ACIA presented the ﬁrst system demonstrator for 5G applications in an INDUSTRIE 4.0 context at the Hannover Messe 2019.