After 13 years of successful research work as a team leader at the Robotics Innovation Center of the DFKI, Prof. Dr. Elsa A. Kirchner has now accepted a call to the University of Duisburg-Essen (UDE). There, she was appointed professor in the new Department of Medical Engineering Systems in the Department of Electrical Engineering and Information Technology (EIT) of the Faculty of Engineering on August 1, 2021. As an associate professor, Elsa Kirchner will cooperate with the DFKI in the future in the subject area of intelligent assistance and medical technology systems. 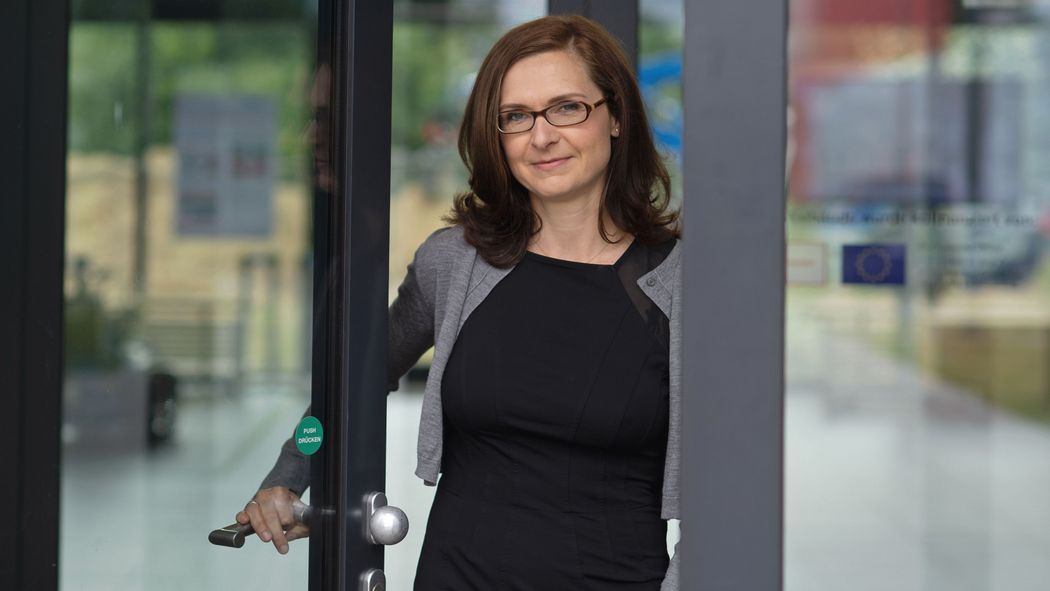 © Felix Amsel
Elsa A. Kirchner is now a professor in the Department of Medical Technology Systems at the University of Duisburg-Essen.

The UDE is one of the youngest and largest universities in Germany, which has developed into a globally recognized research university since its foundation in 2003. The decided professorship "Systems of Medical Engineering" in the independent department Systems of Medical Engineering has an integrative role within the department EIT regarding the field of medical engineering and aims to represent the systemic aspect of medical engineering in research and teaching. This refers to the increasing penetration of medical devices and procedures by computer technology. It involves the use of novel systems, services, and analysis as well as treatment methods that will greatly change the field of activity and research of medical technology at present and in the long term.

In her roles as team leader at the Robotics Innovation Center and as head of the "Brain & Behavioral Lab" of the AG Robotik at the University of Bremen, Professor Elsa A. Kirchner has already been working for many years in the fields of medical technology, robotics, human-machine interaction, cognitive architectures, neurophysiology and electroencephalography. In her research, the biology graduate with a PhD in computer science successfully combines artificial intelligence with neuroscience to not only enable machine learning through human interaction, but also to make it as intuitive as possible. In the context of her professorship, she will continue work on her previous research topics, focusing on rehabilitation and assistance systems, especially exoskeleton technologies, as well as biosignal analysis for human-machine interaction and interactive learning.

As part of her cooperation with the DFKI, Elsa Kirchner is currently leading the EXPECT project at the Robotics Innovation Center, which is funded by the German Federal Ministry of Education and Research (BMBF). It deals with the development of an adaptive, multimodal interaction platform for human-robot collaboration, particularly in the field of intelligent rehabilitation robotics. In addition, she is part of the executive team of the M-Rock project, also funded by the BMBF, which aims to develop technologies that allow robots to automatically adapt to the individual needs of users, including the use of implicit feedback in the form of EEG data.

Curriculum Vitae Prof. Dr. Elsa A. Kirchner
Elsa A. Kirchner, born in 1976, studied biology at the University of Bremen from 1994 to 1999. In 1999 she received her diploma. Her diploma thesis was the result of a cooperation between the Institute of Brain Research I: Behavioral Physiology and Developmental Neurobiology at the University of Bremen and the Bonn University Clinic for Epileptology. From 1997 to 2000, she was a scholarship holder of the German National Academic Foundation. During her studies she received several awards and further scholarships. With the sponsorship award of the "Klee Family" Foundation, she was able to conduct research as a visiting scientist at the "Department of Brain and Cognitive Sciences", MIT in Boston, USA, from 1999 to 2000. Since 2005 she has been a research associate at the University of Bremen in the Department of Mathematics and Computer Science. She was head of the "Brain & Behavioral Lab" in the Robotics Group there until 2021. At the Robotics Innovation Center of the DFKI, she led the team "Interaction" since 2008 and the extended team "Sustainable Interaction and Learning" since 2016. In 2014, she received her PhD in computer science from the University of Bremen. She is the author of more than 80 publications in international journals and conferences and seven book chapters. She supervised several diplomas, master as well as bachelor theses and is a reviewer for various international journals and conferences.

Since 2018, she has been a member of the Platform Lernende Systeme in the Working Group 6: Health, Medical Technology, Care. She is also a founding member of the "Space2Health" network of the DLR Space Agency, which is funded by the BMWi. Furthermore, she was and is involved as an expert for AI, human-machine interaction, assistance systems and autonomous robotics in the definition of new funding corridors, especially at the BMBF in the field of medical technology and care of the funding priority "Human-Technology Interaction" and at the BMWi. In addition, she works as an expert for private foundations and regularly for the Ministry MA 23 - Economy, Labor and Statistics, Vienna, Austria as well as for the German Research Foundation (DFG).