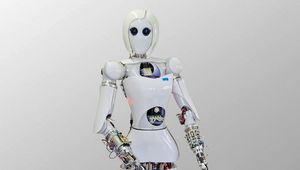 The main goal of the project BesMan is the development of one- and two-arm manipulation procedures as well as the learning of new situation-specific behaviors by means of a machine learning platform. Although many situations can be mastered by using reflexive behaviors, the automatic generation of complex goal-directed behavior cannot be accomplished in this way. It is therefore reasonable that the robotic system incorporates an interface to a human operator, who via demonstration will show the robot how to deal with hazardous or unforeseen situations which the robot could not solve autonomously by simply using reflexive actions.

Prior to optimizing complex goal-directed behaviors by learning approaches, it is necessary to develop concepts by investigating human behaviors. Imitation and reinforcement learning techniques will be used in order to transfer the behaviors shown by an operator to the robot. Especially the transfer of behaviors to non-humanoid robots should be possible. In order to do that, a fast and fully autonomous learning system needs to be realized whose behaviors are based on observations of human operators and which is independent of the robot morphology. The learning platform to be developed needs to be as general as possible in order to be useful for a variety of problems and situations as well as to enable its use on different robot morphologies.

Besides the high demands on the flexibility of the behavior of a robot system confronted with unforeseen situations, also the requirements on the robot-environment interaction capabilities are considerably increased. Those are problems which would benefit from having two manipulators with many degrees of freedom and provided with fine manipulation skills. Besides the learned behaviors, also planning algorithms should be utilized for autonomous manipulation in unforeseen situations which could be handled without the intervention of an operator or for the coordination of both arms. Similarly, reflexes should enable the solution of problems which require an immediate response without involving high-level decision circuits; for instance, to counterbalance forces appearing on the end-effectors while contacting the objects to manipulate.

In order to prioritize different primitives, skills and/or behaviors, a behavior-based software architecture - developed in the Project SpaceClimber - should be utilized and enhanced to deal with dynamical changes and its associated constraints and to integrate the previously-mentioned learning and planning algorithms within the existing reflex-based architecture.

The results of this project should show and develop general solutions which are independent of the morphology of the robot and of its application scenario. The transfer of the developed solutions between different robotic systems (e.g. humanoid and non-humanoid systems, or one or two-arm systems) and between application scenarios (e.g. space and logistics) should be exemplary shown at the end of the project in several tasks which will be defined during the course of the project.